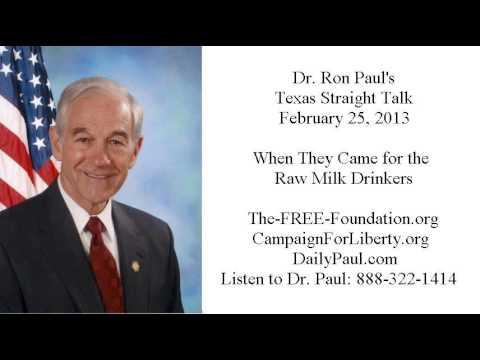 While I oppose most gun control proposals, there is one group of Americans I do believe should be disarmed: federal agents. The use of force by federal agents to enforce unjust and unconstitutional laws is one of the major, albeit overlooked, threats to liberty. Too often Americans are victimized by government force simply for engaging in commercial transactions disproved of by Congress and the federal bureaucracy.

For example, the offices of Rawesome Foods in Venice, California, have been repeatedly raided by armed federal and state agents, and Rawesome’s founder, 65-year old James Stewart, has been imprisoned. What heinous crime justified this action? Rawesome sold unpasteurized (raw) milk and cheese to willing customers – in a state where raw milk is legal! You cannot even drink milk from a cow without a federal permit!

This is hardly the only case of federal agents using force against those who would dare meet consumer demand for raw milk. In 2011 armed agents of the Food and Drug Administration (FDA) raided the business of Pennsylvanian Amish farmer Dan Allgyer. Federal agents wasted a whole year and who knows how many millions of our tax dollars posing as customers in order to stop Allgyer from selling his raw milk to willing customers.

The use of force against individuals making choices not approved of by the political elite does not just stop with raw milk. The Natural News website has documented numerous accounts of federal persecution, including armed raids, of health food stores and alternative medical practitioners.

Federal bureaucrats are also using force to crack down on the makers of gold coins for fear that people may use these coins as an alternative to the Federal Reserve’s fiat currency. Bernard von NotHaus, the founder of Liberty Dollars, is currently awaiting sentencing on federal counterfeiting charges — even though Mr. von NotHaus took steps to ensure his coins where not used as “legal tender.”

Yet, the federal government was so concerned over the possibility that Mr. von NotHaus’s customers might use his coins in regular day-to-day commerce they actually labeled Mr. von NotHaus a “terrorist.”

These type of police state tactics used against, among others, raw milk producers, alternative health providers, and gold coin dealers is justified by the paternalistic attitude common in Washington, D.C. A member of Congress actually once told me that, “The people need these types of laws because they do not know what is good for them.” This mindset fuels the growth of the nanny state and inevitably leads to what C.S. Lewis said may be the worst from of tyranny “…a tyranny exercised for the good of its victims.”

All Americans, even if they do not believe it is a wise choice to drink raw milk or use gold coins, should be concerned about the use of force to limit our choices. This is because there is no limiting principle to the idea that the government force is justified if used “for our own good.” Today it is those who sell raw milk who are being victimized by government force, tomorrow it could be those who sell soda pop or Styrofoam cups. Therefore, all Americans should speak out against these injustices. Please Visit Source: Ron Paul.- Tags: Ron Paul, Federal Agents, Raw Milk, Amish farmer, Dan Allgyer, Federal bureaucrats, Rawesome, James Stewart, news, Big Brother