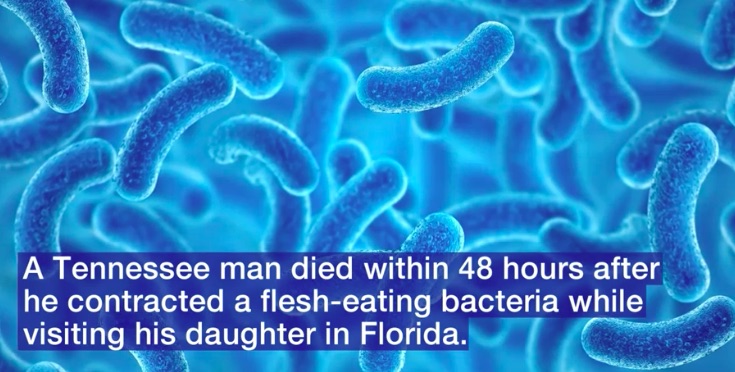 – A Tennessee man died within 48 hours after he contracted a flesh-eating bacteria while visiting his daughter in Florida.

In an emotional post on Facebook, daughter Cheryl Bennett Wiygul described the circumstances before her father’s death.

“Flesh Eating Bacteria sounds like an urban legend. Let me assure you that it is not. It took my Dad’s life,” she said. “Less than 48 hours after getting out of the water feeling great, the bacteria had destroyed him.”

Last week, Wiygul’s parents, who are from Memphis, went to stay with her in Okaloosa County, Florida. They were out in the bay on the boat near Crab Island, went to the beach in Destin twice, splashed around Turkey Creek and swam in Boggy Bayou, she said.

“When my parents got in town I was fanatical about Neosporin and liquid band-aid. My Dad didn’t have any open wounds,” she said in the post. He had a couple places that were practicality healed small scratches on his arms and legs that I made sure were super sealed up. My mom religiously sun-blocked him. We were taking precautions and we were good, so I thought. We had a blast.“

On Friday, they spent the day at Rocky Bayou riding jet skis and throwing the ball around in the water, she said.

Her father stayed up late on Friday night and watched a movie.

“He was happy and talkative, seemed to feel fine as he did all week,” the daughter said.

But around 4 a.m. on Saturday morning, 12 hours after the family was in the water, Wiygul’s father woke up with a “fever, chills and some cramping,” she said.

Her parents decided to go back to Memphis and her mother wanted him to near his doctors to have him checked. Her father also has cancer, so his immune system was compromised, according to Wiygul. She said he’s battled cancer for many years and has been in the water several times, so it didn’t seem like a risk at the time.

But he “got worse on the way home.”

“His legs started to hurt severely. He was becoming extremely uncomfortable. My Dad has been through a lot and he is not a complainer so he had to have been in a lot of pain to vocalize it,” the daughter said.

Her parents arrived at Baptist Hospital in Memphis around 8 p.m.

“As they were helping him get changed into his hospital gown they saw this terribly swollen black spot on his back that was not there before,” she said. “ I never saw a cut on his back and neither did she. We certainly hadn’t seen this spot.”

Then, the black spot doubled in size.

“A new one was starting to pop up. His arms were becoming more blotchy by the minute and he was in a great deal of pain. Some of the nurses said they’d never seen anything like it,” she said.

At 1 a.m., Wiygul’s father became septic and was moved into ICU.

“He coded shortly after and they had to bring him back. My dad had a lot of medical issues but heart was not one of them. They had to intubate him. He coded again,” she said. “They said his organs were too damaged and his blood was too acidic to sustain life. He was gone by Sunday afternoon.”

“We got lab results today: Vibrio vulnificus which manifests into necrotizing fasciitis (flesh eating bacteria) ultimately leading to sepsis. Vibrio vulnificus is a bacteria that is transmitted by eating undercooked shellfish or through an open wound,” she said.

Wiygul also pointed out that there were no bacteria warnings at any beach or park that the family visited.

“They do post advisories for high bacteria but there were none. I would never have taken my Dad in the water if there was a bacteria advisory but it would have been because I didn’t want him to get a stomach virus not because I thought it would kill him,” she said.

She realized that her father also should not have been in the water because of his immune system and expressed remorse.

“I knew you shouldn’t swim with an open wound but I didn’t realize he shouldn’t be in the water with his immune system,” the daughter said. “I feel like I should have known and that is something I will live with for the rest of my life.”

“I do believe if there was a simple sign posted about the risk of swimming with an open wound or an immune disorder, we wouldn’t have let him get in,” Wiygul said.

Her father’s death led her inform the public because she doesn’t “want this to happen to anyone else.”

“This is so raw and personal to me that I did not want to post about it, but if I can help one person, then it is worth it. There is not enough education out there about the bacteria in the water,” she said. “There needs to be signs posted at every beach, every city and state park, and every bayou stating that ‘due to naturally occurring bacteria in the water people with open wounds or compromised immune systems should not enter.’”

“It was too late for us. Please just pass this on so it can help someone else,” she said.

This story was reported from Los Angeles. Source