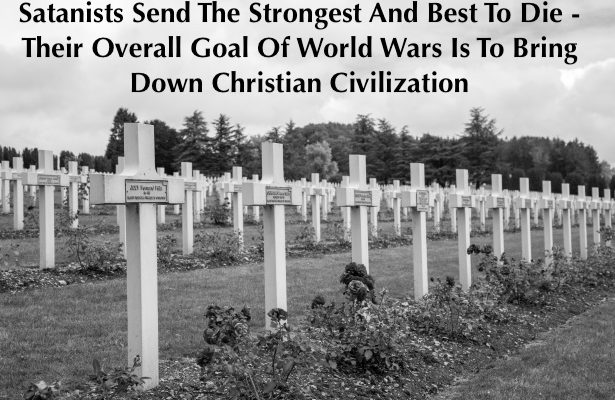 The Masonic bankers were only a few hundred, and many were getting old. They were better at making deals, having gay sex and performing child sacrifices. They were not capable, all by themselves, of slaughtering millions of strong, young men.

So they patiently concocted a world war. This was also highly profitable. They owned the companies that made the machine guns that killed the young men. 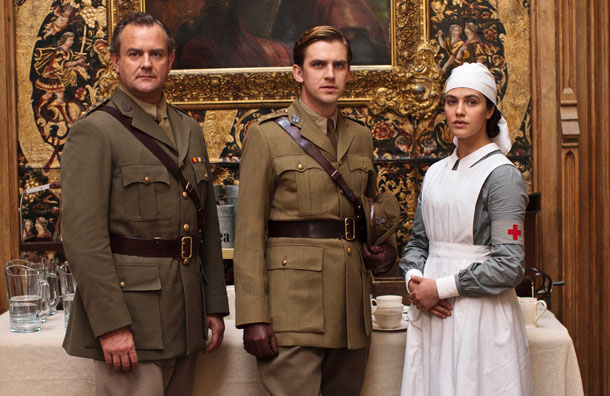 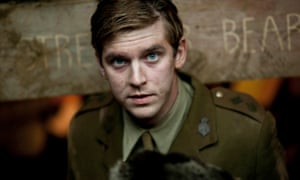 Nov 11,1918 marks the 100 year anniversary of the end of WW1. We are doomed unless we recognize society has been subverted.

In historical perspective, anyone who takes seriously his country’s call to war is a dupe. The enemy is within.

from Jan 31, 2012
by Henry Makow Ph.D.Like millions of others, my wife and I have been enjoying the PBS Masterpiece Theatre TV series, “Downton Abbey.” Set in an English Manor House during World War One, the costume drama depicts the prevalent attitude that a man’s virility and honor are measured by his willingness to die for his country.There is no questioning the necessity of the war, nor any suspicion that it might be a sinister ruse.

In fact, the only character who is cynical is the villain, Thomas, who engineers a minor injury to escape service.

The young heir to the Estate, Matthew Crawley, left, is paralyzed from the waist down.This happens when you run into a hail of machine gun fire and mortar shells. He seems surprised by the consequences of his “heroism.” He’ll never be able to walk, or to procreate.

This is what the Illuminati (Masonic)  bankers wanted, to destroy Europe’s best.

The Masonic bankers were only a few hundred, and many were getting old. They were better at making deals, having gay sex and performing child sacrifices. They were not capable, all by themselves, of slaughtering millions of strong, young men.

So they patiently concocted a world war. This was also highly profitable. They owned the companies that made the machine guns that killed the young men.

Illuminati Jews and Masons hate Christianity first and foremost. “Christianity is our only real enemy since all the political and economic phenomena of the bourgeois states are only its consequences,” Insider C. Rakovsky, told his NKVD interrogator.

Their overall goal of WWI was to bring down Christian civilization. The German, Austrian and Russian monarchies were all destroyed.

Out of the old Christian order would emerge the (satanic) New World Order! ( This is the real meaning of the terms “revolution” and “progressive.”)

“The lamps are going out all over Europe, we shall not see them lit again in our lifetime,” said the British Foreign Secretary Edward Grey, a Freemason who played a major role in engineering this catastrophe.

He got the leaders of France and Russia to sign a secret treaty that stated that if Germany or Austria-Hungary attacked, they would join England to defeat them. Sir Edward concealed the existence of the treaty, and lied to Parliament when asked about it.

The goal of the war was to kill the cream of the new generation of white Christian males. They succeeded: 10 million men were killed and 21 million maimed on both sides.

HOW THEY MADE THE WAR

This war was concocted by Illuminati (Cabalist) Jewish bankers and Freemasons.

On the British side were Lord Robert Cecil, a wealthy banker; Lord Herbert H. Asquith, British Prime Minister 1908-1916; Viscount Haldane,  Secretary of State for War; Lord Nathan Rothschild; and Lord Alfred Milner, the second most powerful man in the British government after 1916.

A French observer wrote, “for some time a group of financiers whose families for the most part are of German Jewish origin…exerts a dominant influence over [Prime Minister 1916-1922] Lloyd George.  The Monds, the Sassoons, Rufus Isaacs, representatives of the International Banking interests, dominate England, own its newspapers and control its election.”

Conditions in Germany were similar. “…since the beginning of Kaiser Wilhem II’s reign, the Illuminati Jews had been the real rulers of the German empire. For the last fifteen years, those in immediate personal contact with the Kaiser were the Hebrew financiers., Hebrew manufacturers and Hebrew merchants such as Emile and Walter Rathenau, Ballin, Schwabach, James Simon, Friedlander-Fuld, Goldberger etc. (The Red Thread, p.153)

All that remained was to light the fuse. The First World War began August 14, 1914, after the assassination of the Austrian heir Archduke Franz Ferdinand on June 28 by the Jewish Mason Gavrilo Princep.

Kaiser Wilhelm believed the Masons were responsible for the Great War. He wrote:

“I have been informed that an important role was played in the preparation of the World War directed against the monarchical Central Powers by the policy of the international ‘Great Orient Lodge’; a policy extending over many years and always envisaging the goal at which it aimed…”

“In 1917 an inter- national meeting of the lodges of the ‘Great Orient’ was held, after which there was a subsequent conference in Switzerland; at this the following program was adopted: Dismemberment of Austria-Hungary, democratization of Germany, elimination of the House of Hapsburg, abdication of the German Emperor, … elimination of the Pope and the Catholic Church, elimination of every state Church in Europe.”

Thus Max Nordau, co-founder of the World Zionist (i.e. Masonic) Organization was able to predict WWI in 1903: “Let me tell you the following words as if I were showing you the rungs of a ladder leading upward and upward: Herzl, the Zionist Congress, the English Uganda proposition, the future world war, the peace conference – where with the help of England a free and Jewish Palestine will be created.”

Thus with Freemasons controlling both sides, it was easy to manipulate the Kaiser into attacking Belgium. The “mediator” was Albert Bellin, a prominent Illuminati Jewish businessman and friend of the Kaiser. Together with the English, he managed to mislead the Kaiser as to England’s intentions.

To quote Andrei Krylienko (The Red Thread): “An ambiguous statement by the British on the side of France and Russia, could still, as the French ambassador to Germany reported, have led Germany to decide against aggression…In short, war was not decided upon by Wilhelm II…but by the occult powers…by whose intrigues [it] was made to seem ineluctable.” (155)

Wilhelm quickly recognized that he had fallen into a carefully laid trap.

In A Child of the Century, Ben Hecht wrote, “the Twentieth Century was cut off at its knees by World War One.”

The same can be said of mankind which has a cancer, Cabalism, gnawing at its vitals. We are at the mercy of a multi-generational satanic conspiracy which is nearing consummation. Modern history, properly understood, is the story of this process of subversion. Continued….

In August 1914, Kaiser Wilhelm realized he had been fooled: “England, Russia and France have agreed among themselves … to take the Austro-Serbian conflict as an excuse for waging a war of extermination against us…”

War is used to eliminate any nationalist resistance to Masonic Jewish banker world hegemony. It expresses their Talmudic hatred of humanity. (Also, they need to constantly degrade and destabilize society to protect their fraudulent credit monopoly.) Consider the needless  suffering they caused in both world wars. “Terror” is just an extension of this ongoing war on humanity.

When we left off, we were exploring the proposition that the New World Order is the British Empire repackaged, and this empire was literally a marriage of effete British aristocracy and virile (or virulent) Jewish finance under the umbrella of Freemasonry.

Webster Tarpley is a gifted historian who generally eschews mention of Jewish bankers in favor of euphemisms like “Venetians.”  Therefore it is unusual for him to state bluntly that King Edward VII was in the pay of the Rothschilds and was responsible for World War One.

Edward VII didn’t become king until 1901 when he was 60 years old. As Prince of Wales, he was estranged from his mother,  kept on an allowance and was deeply in debt. He allowed a “series of Jewish bankers to manage his personal finances.”  These included Baron von Hirsch and Sir Ernest Cassell. “Edward also cultivated the Rothschild and Sassoon families. In short, Edward’s personal household finance agency was identical with the leading lights of turn-of-the-century Zionism.”
(King Edward VII: Evil Demiurge of the Triple Entente & WW1.)

Tarpley is equally forthright in stating that “Edward VII, far more than any other single human being, was the author of the First World War…the most destructive single event in the history of Western civilization” which opened the door to Communism, Fascism, the Great Depression and World War Two.  Tarpley falls into the trap of establishment historians by attributing great events to single personalities. These personalities are invariably puppets of the people who pay their bills.

Tarpley goes into some detail about how King Edward and his Foreign Secretary Sir Edward Grey, the son of Edward’s horse master, engineered World War One. Essentially, they deceived Kaiser Wilhelm into believing that England would remain neutral. To prevent the war, all they had to do was clarify this point. Germany would have backed down and reined in Austria.

In August 1914, Kaiser Wilhelm realized he had been fooled: “England, Russia and France have agreed among themselves … to take the Austro-Serbian conflict as an excuse for waging a war of extermination against us…That is the real naked situation slowly & cleverly set going by Edward VII…The net has been suddenly thrown over our heads, and England sneeringly reaps the most brilliant success of her persistently prosecuted anti-German world policy against which we have proved ourselves helpless, while she twists the noose of our political and economic destruction out of our fidelity to Austria, as we squirm isolated in the net.”